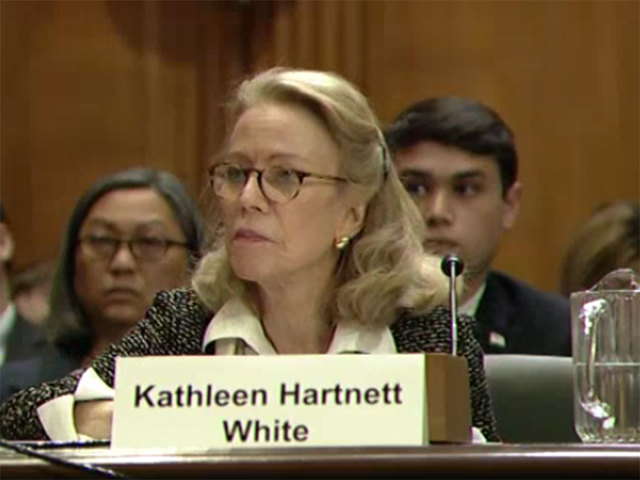 Donald Trump recently picked Kathleen Hartnett-White, a denier of human-caused climate change and a staunch believer that global warming only serves to bring down fossil fuel companies, to head the Council on Environmental Quality.  His decision wasn’t surprising, and that’s part of what makes it so horrifying.  We’ve become numb to actions that, under any other president, would be cause for protest.

Hartnett-White has worked for the Texas Public Policy Foundation, an organization headed by GOP funders such as the Koch brothers.  She opposed the 2007 Supreme Court Ruling that labeled carbon dioxide as a regulatable pollutant, once calling the substance “an odorless, invisible, beneficial, and natural gas.”

She is a part of the very swampy, political machine that Trump pledged to eradicate upon taking office, and she could have real power in the position Trump wants to give her.  Deregulation, accelerating destructive projects, and limiting environmental requirements would all be realities with Hartnett-White at the helm.

In a world where acting upon climate change might not even be enough to save humanity from its effects, limiting efforts to slow global warming is immoral and cannot be shrugged off as another Trump debacle.  Entertaining  the archaic views of Kathleen Hartnett-White is illogical–giving them federal power is horrifying and demonstrates Trump’s base favoring of corrupt oil tycoons over humanity’s future, among other traits.

According to NASA, minimum arctic ice levels are falling roughly 13% per decade, carbon dioxide has increased by 408 parts per million (the highest in 650,000 years), and sea levels are rising by 3.4 millimeters every year (or seven inches in the past 100 years).  These numbers may seem distant and hard to wrap our minds around, but they frighten every scientist with a grasp of their consequences.  Acting on these realities to stop rising temperatures and sea levels shouldn’t be seen as some unruly task just because effects of climate change aren’t tangible for all of us.

We can’t let the quantity of Trump’s outrageous decisions distract us from just how outrageous they are, even if we find it difficult to take Hartnett-White seriously.  Global warming is a grave issue, and another one of those so-horrible-it’s-funny decisions from Trump shouldn’t get in our way of addressing it.

In the Face of Trump’s Misinformation, Warnings Emerge

Greta Thunberg is here to stay

The Other Side of Canada

If Trudeau is meant to be the best choice in this election, he needs to reconsider the stances he’s taking on issues like climate change and secularism laws and follow through on the empty promises he keeps on making. Be the progressive leader we want you to be. We’re counting on it.